Your Gift Will Bless Israel

You Can Take A Stand.

Global anti-Semitism is on the rise. Israel, the world’s only Jewish state, faces hostility from many enemies and endures repeated threats of war and terrorism along its dangerous borders.

Through CBN Israel, you can give urgent relief to Israel’s most vulnerable citizens—including victims of terrorism, lonely refugees, families in crisis, and aging Holocaust survivors. You are offering them food, assistance, and hope in their time of need.

Your support also has a global impact. You can fight ignorance and hatred with truth. You can oppose global anti-Semitism and hostility toward the Jewish state by reaching millions worldwide with unrivaled news and films that tell the true story of Israel. 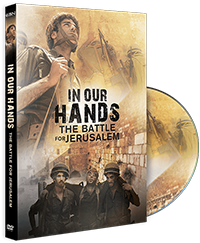 In appreciation for your monthly gift of $25 or more, we will send you a free DVD copy of the CBN docudrama, In Our Hands: The Battle for Jerusalem.

This extraordinary film was seen by hundreds of thousands in sold-out theaters across America. Shot entirely on location in Israel, this gripping docudrama tells the story of the battle for Jerusalem through the eyes of Israel's 55th Paratrooper Brigade.

God made an unwavering promise in Genesis 12:3: “I will bless those who bless you.”